The surviving wild Elephants in Vietnam are now less than 100.

Jun, a 6 year old elephant, was found trapped and wounded by the local people. Now Jun has been moved to the Dak Lak Elephant Conservation Center. (Photo: Phuong Ngan / WWF-Vietnam)

From a position of reverence and adoration in past centuries, Asia’s Wild Elephants may soon become a thing of the past with the many threats and pressures they face today.

In many countries across Asia, elephants have become more of a pest: to be gotten rid of however possible. And, the problem is not restricted to just one or two countries alone.

The situation is so bad now that these giant mammals are presently critically endangered in many parts of their native habitats.

Modern day Vietnam is one example.

Conservation organizations reveal that Vietnam’s wild elephant population dropped by about 95 percent in just a few decades. They were between 1,500 and 2,000 elephants in Vietnam as at 1990: today they number less than 100.

Also, more than 20 wild elephants died/were killed over the past seven years alone, and about 75 percent of those were not up to one year old.

These figures are alarming and represent a historic low over the last 15 years. The government and conservation bodies are now working frantically to save the last of these giant mammals.

How Did This Situation Get So Bad?

Elephants in Vietnam have a place of importance and significance in the country’s religious, cultural, and historic development. You’ll find carvings and images of them gracing many buildings there.

They also played a major part in the Vietnam war. Thereafter, they became a popular option for moving very heavy loads, for logging, in construction, transportation, etc as the country began to develop industrially and commercially.

Today, these creatures face a very frightening future. In fact, all indications show that they are going extinct, fast!

Reasons Behind The Decline Of Elephants In Vietnam

Below are the major reasons these animals are disappearing so quickly.

Keeping people away from the remaining wild elephants is likely the only thing that will save them from extinction.

Conservation Efforts To Save The Last Elephants In Vietnam 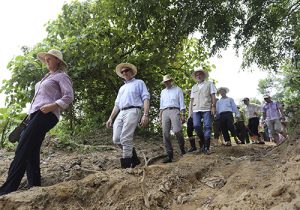 In response to the decline of the elephant population, the Vietnamese government developed and began implementing The National Elephant Action Plan in July 2016.

The plan is managed by the Forest Protection Department and will see to the creation of elephant protection areas in Dak Lak, Dong Nai and Nghe An provinces.

Those three provinces are home to the largest populations of elephants in Vietnam.

Among other points, the plan covers issues like human-elephant conflicts, continuous education of the native people, the setting up of electric fences and trenches, etc.

In addition, any isolated elephant herds will be relocated to any of the protection areas.

Efforts By Other Countries

The money is to be disbursed through USAID (United States Agency for International Development) and will go to support a newly opened elephant reserve. The reserve covers almost 19,000 hectares (47,000 acres) in the Nong Son District.

Villagers have reporting sightings of elephants in the area but many times the elephants are found already dead after being attacked by poachers.

Stakeholders to the project including US Ambassador Ted Osius and Mr. Le Ngoc Trung, the chairman of Nong Son district agreed that improving the livelihoods of local farmers in the area and helping residents nearby find better sources of income is the best hope for the elephants to recover.

As it is, events within the next ten years will be determine the future of these animals and the conservation efforts will need all the support it can get.

However, the numbers don’t lie: less that 100 elephants is a frightening number. Hopefully these last minute efforts aren’t too little, too late.