We can all relate with some of the weird myths that exist about elephants. Here are a few of the facts. 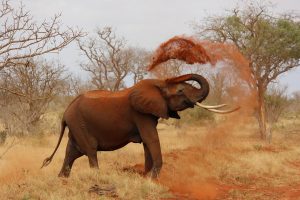 An Elephant Coating Itself With Sand

If there’s one majestic land animal you can’t afford to ignore, it’s got to be the elephant. While it’s admired and loved by some, others hunt it for its tusks or work with it peacefully as an indispensable part of their daily lives.

Elephants are also an important figure in religion, literature, the media, entertainment, and so on.

The Asian Elephant, for instance, is a vital part of Asian history and it’s still revered to date.

But, did you know that we probably still don’t know everything about these animals yet? Or that many things elephants do aren’t just for fun but that they have a purpose for those actions?

To clear the air a bit, we’ve rounded up 10 facts about elephants that are sure to educate all elephant fans out there some more.

1) Elephants are the most vocal animals in the animal kingdom.

They communicate through rumbles, screams and trumpet vocalizations. These vocalizations enable the elephant to communicate among each other even as far as five miles away. They produce rumbles of low frequency that travel for a longer distance without being absorbed by the environment.

2) Elephants are known to self-medicate themselves.

For example, the pregnant females often use a certain plant similar to the one used by some native Kenyan women to induce labor before birth.

3) They sleep standing up.

On the entire body of an elephant, its legs are the strongest. Obviously, they must be to be able to carry so much weight around. And the legs never rest! They support the entire body of the elephant during the day and at night. Actually, these animals sleep while standing for about three/four hours and then wake to eat or move around.

4) The brain pattern of an elephant contains a more complex gyral pattern than all the primates and even humans.

The nerve cells of the elephants can be compared to those found in humans. With this kind of physiology, elephants manufacture and make tools using their feet and trunk. For example, an elephant was recorded breaking a tree twig and used it to chase away the flies on its body. 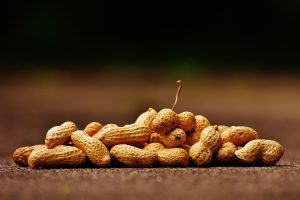 Herbivores are animals that entirely depend on vegetation for food. However, elephants are quite different. They have taste preferences and despite what movies would have us believe, they don’t like peanuts. In fact, they detest the taste and they avoid it both in the wild and in captivity.

Elephants actually dislike the taste of peanuts so their keepers are always careful not to include it in their diet.

6) Elephants are among the few animals that can recognize themselves in the mirror.

7) They have invented their own sunscreen.

By observing elephants, you may assume they like to play with sand, or that they are obsessed with it.

Well, they coat themselves with sand not because they are playing with it but it’s actually to protect their extra-sensitive skin. Though, they have tough-looking, leathery skin they are prone to sunburn. Sand, and even mud, acts as a barrier between their skin and the sun.

Elephant skin is so sensitive that the animal will notice if a fly lands on its body.

8) Elephants get six sets of teeth in their  life time.

Each set contains twenty-six teeth each. The new set of teeth forces the old ones to shed off as they take over the root system and grow.

9) They are afraid of bees.

They fear bees so much that they will run or walk away quickly if they hear just the recording of disturbed bees.

Elephants are not afraid of mice. Most likely they are startled by the sudden appearance of a mouse around them.

10) They are emotional and will show interest in the death of their kind.

These animals show emotional attachment comparable to that of humans. They can exhibit sympathy as well as anger.

A herd will protect a sick member of the group. Also, they appear to recognize body parts (e.g. tusks) of their dead family members.