Groups of hungry wild elephants are raiding farms and hurting their tame counterparts in the process. 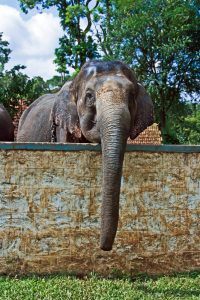 Added to the threat of extinction, wild elephants in Vietnam are facing another equally distressing problem: Lack of food.

In a number of provinces in the country, there have been several clashes between wild elephants and their domesticated kind. Every one of these clashes has been as a result of the wild herds searching for food. As at the last count, at least five such clashes occurred over the past few months especially from March to August 2017.