Though the African Elephant continues to exist across much of Africa, they are under serious threat. 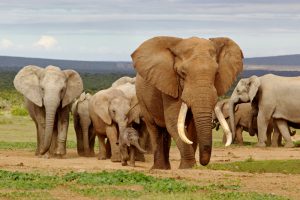 Though they look similar to the Asian elephant from afar, closer examination shows some remarkable differences.

In addition, whereas the Asian elephant’s trunk ends in a single lip, that of the African elephant ends in two opposing lips.

They use their trunk as a fifth limb, for sound amplification, and for touch. Interestingly, both the male and females of these elephants have tusks: they use them to feed, to fight, and for digging.

Both sexes continue to grow in body size throughout their lifetime.

Female elephants typically live longer than the males, though that also depends on their environment. For instance, in the wild female elephants can live for over 60 years. But in zoos they die quicker.

The largest documented individual stood at 4 meters (13.1 feet) at the shoulders and weighed a whopping 10 tons.

Elephants don’t jump or gallop, but they can move quickly at speeds reaching about 15 to 20 m/h (24 to 32 km/h) and even faster than that.

The African elephant is a very intelligent creature. In fact, they are among the world’s most intelligent animals with their brain being larger than that of any other land animal. Their brain structure is comparable to that of dolphins, primates and humans.

They are often taught to perform complex tasks and tricks.

Because elephants are vegetarians, they don’t even attack other animals for food. But conflict with humans and a constantly shrinking habitat means there are reportedly about 500 human deaths a year from elephant attacks! Though on the other hand, humans kill them in the thousands yearly.

These are very large and heavy animals and they should be treated with caution especially in the wild.

Female African elephants can reproduce from the age of 10/12 years and there is no specific mating season. However, they are less inclined to produce offspring in times of drought.

Like their Asian counterparts, these creatures have a low birth rate. Usually, pregnant females birth just one calf after a 22 month gestation period. Also, they only give birth once every 3 to 6 years.

Newborn calves live on their mother’s milk for anywhere from 6 to 18 months before they are weaned. Although, in very rare cases some calves will nurse for up to 6 years.

Females in estrus (heat) are a scarce ‘commodity’ and males over the age of 25 will compete fiercely for the chance to mate with them.

9) Diet Of The African Elephant

These are herbivores and they may eat up to 450 kg (992 lbs.) of vegetation daily. They’ll eat grass, a variety of small plants, bushes, fruits, twigs, tree bark, and roots.

African elephants have a habit of using their tusks to tear off leaves and branches of trees leaving devastating results in the path. Therefore, just one herd of these mammals can destroy a considerably large portion of vegetation to the detriment of other animals in the vicinity.

The Loxodonta species has suffered heavily from illegal poaching by ivory traders. In fact, this industry alone was responsible for the population of the African elephant declining from 3 to 5 million (1940s) to just over 600,000 individuals (1990s).

An international ban on ivory trade imposed by CITES (Convention on International Trade in Endangered Species of Wild Fauna and Flora) in 1989 helped to eliminate major ivory markets. Even so, poaching is still a problem in some countries and these animals are often slaughtered indiscriminately.

Consequently, a 2014 estimates counted just 50,000 individuals left in the whole of Central Africa. The main cluster of both species are found in Gabon and the DRC. Exact figures for their numbers in the rest of Africa is conflicting and is anywhere between 700,000 to 400,000.

Another major threat to this elephant is land-use activities by humans (agriculture, construction, etc.)

For now, the African elephant is listed as Vulnerable on the IUCN Red List of Threatened Species.

In March 2013 in Chad, a band of armed poachers slaughtered 86 elephants for their ivory. The dead animals included 33 pregnant females. The attack was described as “a potentially devastating blow to one of central Africa’s last remaining elephant populations” by the Guardian.

The scientific name Loxodonta comes from the Greek words loxós meaning ‘slanting, crosswise, or oblique sided and odoús for ‘tooth.’

This genus has two surviving (extant) species: the African bush or savannah elephant, and the African forest elephant. They both belong to the family Elephantidae and their fossils are found exclusively in Africa. These fossils date back as far as the middle Pliocene epoch (3.3 to 3 million years ago).

African elephants exist widely all over the continent. They live in dense forests, woodlands, scrubland, and even deserts.

You can see them in southern African countries like Congo, Gabon, Malawi, South Africa, Botswana, Namibia, Zimbabwe, Mozambique, Zambia, and Swaziland. Other areas are Kenya, Uganda, Tanzania, and many countries in east Africa. Also, they dwell in West African and North African countries.