As central control of the country disintegrated, wildlife like elephants and rhinos suffered as they were killed in large numbers and their tusks and horns sold to purchase arms and ammunition for troops. These funds literally helped in part to kept the war going and sustained rebel forces.

Being the intelligent creatures that they are, elephant populations fled from Angola and crossed the border into neighboring nations like Botswana, Zambia, and the Democratic Republic of the Congo.

Eventually, the war came to an end in 2002 and some level of relative peace prevailed. The animals sensed it too as elephants and other wildlife gradually returned to reclaim their native territories.

But there was a big and nasty problem waiting for them.

Warring troops left behinds millions of undetonated and still active landmines across Angola. It was just a matter of time before elephants and other animals began dying again; but this time from these deadly explosives.

Yet again, with time, the incidents of elephant deaths and maiming from landmines began to slowly decrease even though the explosives still existed. Observers were interested to find out what was going on.

The Origin Of Bomb Sniffing Elephants

In a post some months back, we talked about collared elephants. Well, data collected by tracking these animals around Angola showed that they could move successfully through mine-infested areas and avoid the mines completely.

Obviously, the animals were now associating the minefields with danger.

But how were they doing this?

Was it a case of seeing their kind getting killed and learning the hard way? Or had they in some way learnt to smell or sniff these mines?

An experiment at Adventures With Elephants (South Africa) could hold the answers to those questions.

Among all creatures tested so far, elephants have the highest sense of smell. Better even than dogs.

Sensory Receptors And The Genetic Angle

So far, among every species tested on the planet, these elephants have the highest count; basically they can detect smell better than any other creature.

Ashadee Kay Miller, a PhD Candidate at the University of the Witwatersrand was eager to find out whether they could detect TNT (Trinitrotoluene), a major component in explosive devices using their sense of smell. She also sought to know how the elephants’ abilities stacked up against those of highly trained, TNT-detection dogs.

A U.S. Army Research funded project allowed her the opportunity to do just that.

So, to carry out the tests, the research group trained three African elephants at the Adventures With Elephants facility in South Africa. This establishment is a major educational tourism concern that focuses on raising awareness about conservation.

By using reward-based training techniques, the elephants were taught to indicate whenever they smelt TNT among a lineup of blank, non-smelly samples initially. Later, they repeated the same tests using highly volatile distractor odors to mask the TNT smell.

The elephants were to investigate a row of buckets and raise their front leg and wave it over a particular bucket once they detected the TNT smell.

TNT has low volatility meaning it’s difficult to smell, but some animals like dogs, bees, and Gambian pouched rats are excellent at sniffing it out.

Test Of Sensitivity And Selectivity 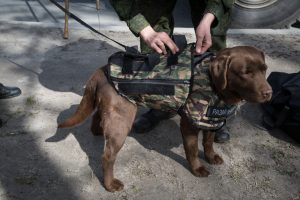 Service Dog: Although dogs are currently the “gold standard” in explosives detection, elephants do quite well too.

Now, there are two aspects to the sniffing process; sensitivity and selectivity. Both of these metrics are extremely important and help trainers monitor how well a particular animal will do out in the field.

In this particular test, the elephants scored 99.7 percent accuracy in sensitivity beating the dogs’ 93.7 percent.

On the other hand, dogs scored 100 percent in selectivity compared to the elephants 95.1 percent.

This could mean the difference between life and death.

But How Practical Is To Adopt Bomb-Sniffing Elephants In Place Of Dogs?

Another major advantage to training elephants in this way is that they don’t require training over and over again. Unlike dogs that require “refresher” training at intervals.

Does this then mean that bomb-sniffing elephants should immediately replace TNT-sniffing canines?

Well, not so fast.

For one thing, the size and weight of elephants is a major minus to using them in a more cosmopolitan setting. Controlling them is also another headache. Can you imagine trying to keep an elephant still in a busy airport, for instance?

Detection dogs are used in some medical and biological settings. These specially trained canines are adept at screening for cancers, diabetes, epilepsy, harmful microbes, pests, and so on.

In fact, some of the dogs perform better at detection than sophisticated mechanical devices.

Given the fact that the trained elephants in the above experiment still passed the test repeated over a year later with no further training in between – and they can stay on target (concentrate) better than dogs – just maybe they could become useful in biosensor fields like early disease detection.

Another advantage is their much longer lifespan; elephants can typically live for up to 60 years in the wild.

But once again, their sheer massive size and the problem of controlling them remains an issue.

If experts can somehow manage those drawbacks and still keep the animals safe, these giant terrestrial mammals could become a valuable life-saving tool.