The relevance of elephants in Thai culture is traceable from the battle for the sovereignty of Thailand to modern times. 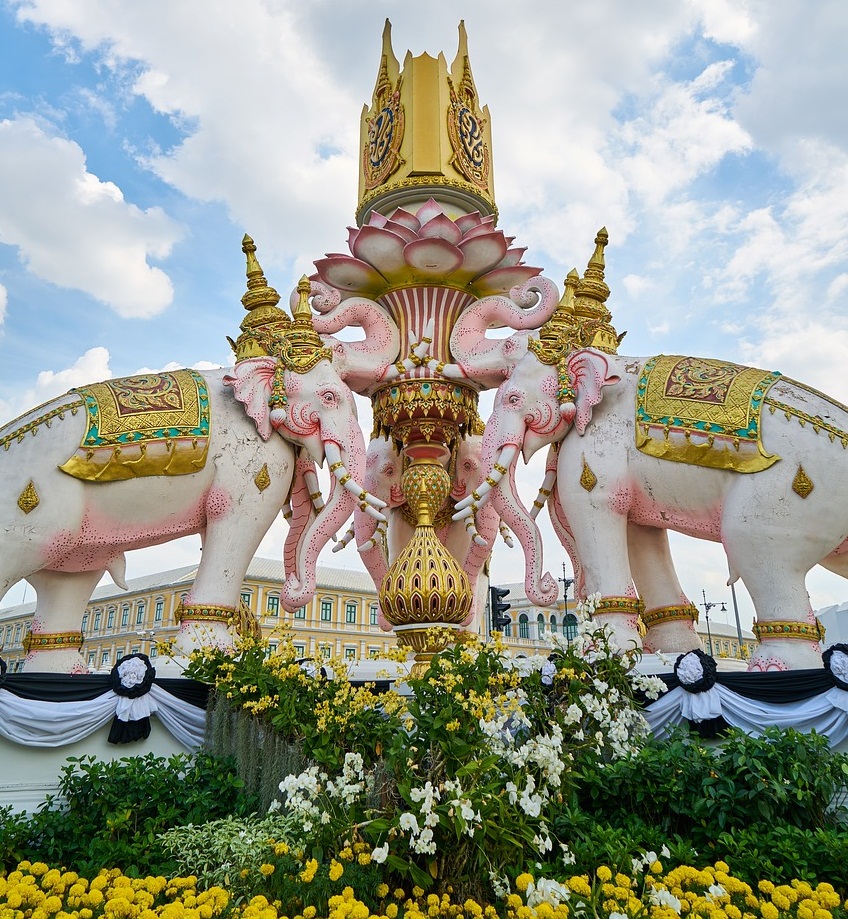 There are two major elephant species today: the Asian and African elephants.

The Thai Elephant or “Chang Thai” is actually the Indian elephant: a subspecies of the Asian elephant and it is Thailand’s national animal. These animals have a long history of relationship with the Thai that goes centuries back. They often say that elephants helped them build the nation they have now.

In addition, you’ll often see intricate art works in Thai royal palaces and temples with drawings of elephants. The Royal Thai navy flag and the official emblems of many provinces bear the image of an elephant too.

These animals served as a means of livelihood, transportation, and even a war machine due to their strength and intelligence.

In Buddhism, it is believed that a white elephant (also called albino elephant) appeared in Queen Maya of Sakya’s dream. In the dream, an elephant circled her before entering into her womb. Only after then was she able to conceive, and that baby in her womb was Buddha.

This is the main reason why an elephant is a religious icon of Buddhism. Thus, Thailand as a Buddhist country has also adopted the elephant symbol.

Elephants In Thai Culture: A Symbol Of Liberty

History made elephants a cultural symbol of Thailand. Other than being a religious symbol, elephants are also a symbol of liberty in Thailand.

Elephants were used in battle since the time of Alexander the Great in countries like Thailand, India, and Myanmar. These war elephants were used for charging at the enemy and as a means of transportation to move from one battle location to the other.

Specifically, the Burmese war which was fought by Burma (now Myanmar) and Thailand also included the use of elephants. The two kings fought for territory and freedom. At some point, it was agreed that if the Thai king won the war, the country will receive its sovereignty. However, if Thailand were to lose the battle, they would remain a part of Burma indefinitely.

The Thai King won the war. Of course, with the help of his elephants. Since then, the elephant became a symbol of freedom and new beginnings in the country of Thailand. 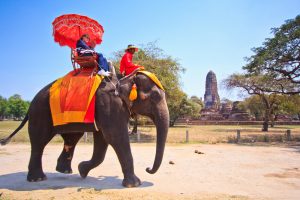 Fast forward to the late 1900s, elephant became a popular feature in the logging industry in Thailand. These animals helped transport trees down the mountains. When logging was still legal in Thailand, the elephant population dropped sharply and never fully recovered to date.

Elephants in Thailand effectively became recognized as an endangered species in 1986.

Logging is now illegal in Thailand. But the immediate fallout of so many jobs lost for the elephants and their Mahouts (elephant rider/trainer) was not positive. This forced them to enter into a new type of living: the elephant entertainment world.

Many elephants are seen on social media and news giving back rides to tourists. Some of these animals perform tricks, dance, and even beg for food so they can eat. But the profits from these tricks are not enough to sustain the elephant’s natural consumption level.

Actually, many captive elephants die of malnutrition and hunger.

Because of this, the elephant-entertainment industry has received a lot of backlash from people across the globe. Elephant entertainment is particularly common in Thailand. Animal rights activists and non-government organizations seek to stop these inhumane acts.

They advocate to put these land giants in sanctuaries where they can be preserved, live a healthy life, and be free from physical and emotional tortures from their abusive Mahouts.

Mahouts are also aware of this unhealthy treatment of the animals. But some Mahouts said that they cannot afford to feed elephants on a daily basis that is why they cling to operations where they can earn money, both for their families and their elephants.

There are still many petitions to stop the elephant riding industry because of the physical trauma to elephants.

The welfare of elephants is taking the center stage in modern times rather than the focus on monetary gain.

Concern for elephants created an organization called the National Elephant Institute (NEI) which started out from Thai Elephant Conservation Centre in Lampang. They closely monitor the national parks and sanctuaries to help protect the remaining elephants in Thailand.

Despite these conservation laws, elephants are still not safe from greedy humans. Elephant tusk is still a very high demand business: killing hundreds of elephants every year.

These tusks are ivory, a material that’s commonly used in art and manufacturing. Southeast Asian countries such as Philippines and Malaysia commonly use ivory for daggers and carving religious images like the Virgin Mary and Catholic saints.

Ivory is also found on other animals’ teeth. These animals include hippos, walruses, sperm whales, and killer whales, etc.

It appears the human desire for ivory and profit has nearly forced the Thai elephant into extinction. Hopefully, the combined efforts of the Thai authorities and various animal right groups will help reverse this trend as soon as possible.