The importance of Elephants in Indian culture is obvious from religion, to architecture, literature, mythology, and history. 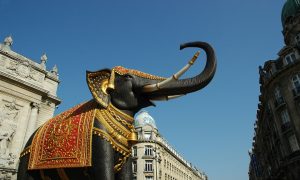 A Bull Elephant Statue. Elephants Are Inseparable From Indian Culture, Religion, And History.

Animals form an important part of Indian culture and beliefs and elephants are undoubtedly the most featured animals. These creatures, specifically the Asian elephants, are used in symbolism, mythology and art such as sculptures, pictures and architecture.

Elephants are strong, intelligent, resilient and capable of strong emotions. They are loved and revered in India.

Elephants In Religious History Over The Years

In other parts of the world such as Africa, people regard elephants as tourist attractions and beasts of burden. Therefore one might wonder why elephants are treated with such respect in India.

What’s so special about them anyway?

Well, for centuries elephants have appeared in religious rituals and traditions. They’ve been associated with the most powerful of deities, and they are seen to represent strength, wisdom and intelligence.

This great significance of elephants in Indian culture has been handed down from one generation to the next and hence their high status in the Indian society.

Some Specific References To Elephants In Indian Culture/Religion

Since about 80 percent of the Indian population actively practice Hinduism, and elephants are regarded as sacred animals by the Hindu, we’re going to look at the significance of elephants without separating religion and culture.

Sanskrit is an ancient Indo-European language of India. The Hindu scriptures, classical Indian epic poems, and many northern Indian languages have their origins in Sanskrit.

The Sanskrit word for elephant is Gaja. This is seen as the Lord Ganesh: one of the most beloved and worshiped deities in India. Lord Ganesh has an elephant head which symbolizes wisdom and great intellect.

He is the God of success and good fortune. He holds qualities of power, wisdom, long life and royalty.

Buddhists revere elephants for their composure, mental prowess, and strength.

The mother of Buddha, Queen Maya of Sakya, is said to have conceived after seeing a vision of a pure white elephant in a dream. This kind of elephant, also called an albino elephant, is an extremely rare creature indeed.

It gave her a white lotus and circled her thrice before entering her womb. Therefore, from its inception Buddhism is linked with the elephant.

They also believe that a white elephant represents a calm mind while a grey one represents an agitated mind. So important are elephants in Indian religious traditions that idols of elephants are typically found on either side of entrance to temples.

Note that they don’t actually worship elephants but they emulate the positive qualities in this creature. Some of these qualities are: obedience, perseverance, and large ears that listen well.

In ancient India, elephants were owned only by the royals. Hence, they still carry that tag of royalty to date. This prestigious position rightfully earned them acceptance as one of the symbols of India and likely explains the several efforts to protect them.

Elephants were first tamed and domesticated in India before other regions, and their use in various daily activities spread to other parts of Asia.

They were also used in wars to ferry heavy equipment and weapons due to their strength and resilience. Their ability to charge at high speed was also another reason warriors used them in fierce battles.

The elephant was heavily used for construction of large structures such as temples and palaces. These temples would have been impossible to make without the help of elephants (since modern earth-moving machinery did not exist then). Therefore to honor the help, you will notice statues of elephants in almost every temple and palace you see in India.

People also tamed them for use in agricultural ventures.

Elephants In The Larger Scheme Of Things 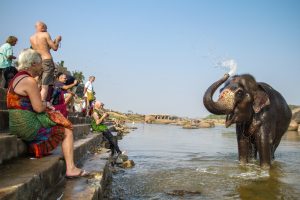 Whether in zoos, circuses or in the wild, elephants still attract large numbers of tourists every year. In modern day India, elephants are an important tourist attraction that earns revenue for the country.

They are also used to lift and move heavy objects such as in the logging industry. There are approximately 3500 elephants that are used in religious ceremonies to carry deities in processions.

In the wild, elephants are important to the ecosystem and help in maintaining the integrity of grasslands and forests. Funds given to protect elephants ultimately lead to protection and conservation of wild, virgin habitats.

Definitely, the elephant can never be removed from its pride of place in Indian culture.