Though the African Elephant continues to exist across much of Africa, they are under serious threat.

Though they look similar to the Asian elephant from afar, closer examination shows some remarkable differences.

The Asian elephant is the largest living land animal in Asia. 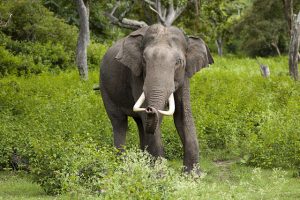 The Asian Elephant is generally smaller than the African elephant. Its body is gray and it has small ears. Elephants of this species also have very thick skin: over 1 inch thick on some parts of their body.  The males of the species have large tusks sometimes measuring up to 5 or 6 feet long. Though, some males do not have tusks at all.